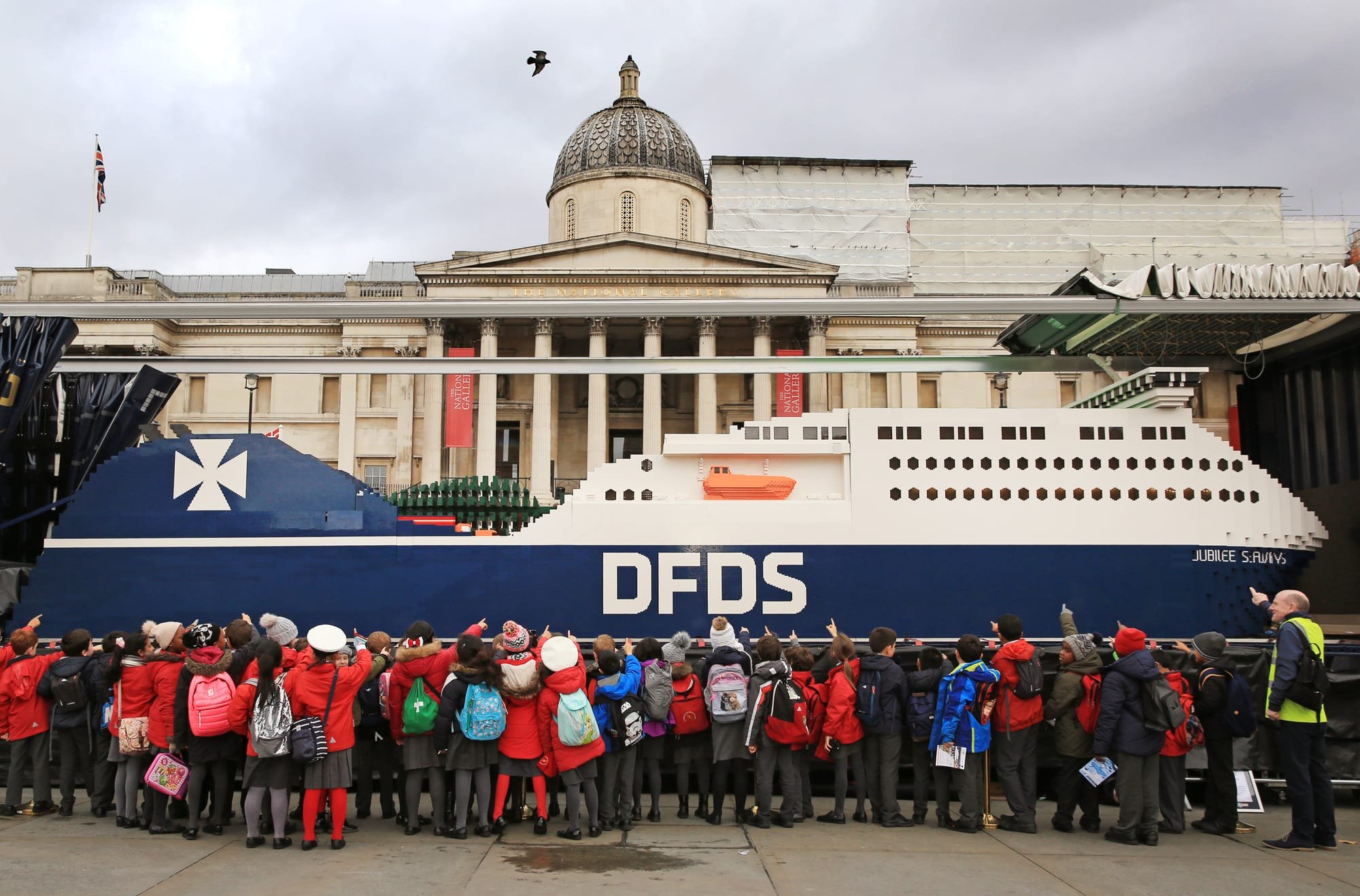 Operations began on 1 January 1867 with route 19 ships, with Copenhagen as the main starting point.

When the Port of Esbjerg opened in 1873 it was the only large port on the west coast of Denmark, and from 1875 DFDS began service from Esbjerg to England.

DFDS changed port in England from Thameshaven, near London, to Parkeston Quay, Harwich. Gradually, additional routes were started up from Esbjerg: to London, Grimsby, Newcastle, and Hamburg.

In 1964 M.S. ENGLAND entered into service on the Esbjerg -Harwich route.

The requirement for transport of cars was sharply on the rise at the beginning of the 1970s. Tonnage was designed to accommodate this, and all DFDS passenger routes were served by passenger ships with roll-on/roll-off facilities.

At the same time, DFDS passenger traffic was converted to "floating hotels." So now the voyage was part of the vacation.

In 1972 all conventional freight traffic was switched to ro/ro traffic. The fleet was reduced to 20 ships through sale of unprofitable tonnage.

In 1978 the passenger ship DANA ANGLIA entered into service on the North Sea together with the ro/ro ship DANA MAXIMA. The first collaboration with Tor Line AB began.

Unfortunately, there were large losses in the first year. In 1983 the company was reorganized. An action plan was put into effect, unprofitable activities discontinued, tonnage sold, and number of employees reduced. Operation of Scandinavian World Cruises was discontinued, and Nordana Line and Mols Linien were sold.

In 1995 the DFDS Group's new joint port in Immingham, England - DFDS Nordic Terminal - began operations. All DFDS ro/ro freight shipping in the UK was concentrated in Immingham and Harwich.

The Cuxhaven-Harwich passenger route was opened in March 2002. It was closed in November 2005 due to increasing economic pressure from low-cost airlines and the cessation of duty-free on-board sales between EU countries in 1999.

On 2 October 2002 a new passenger route between Copenhagen/Trelleborg and Gdansk in Poland was opened. DANA ANGLIA, which was renamed DUKE OF SCANDINAVIA, was put into service on the route. However, approximately one year later the route was discontinued.

In September 2006 DFDS took over the route between Bergen/Haugesund/Stavanger-Newcastle from the Norwegian shipping company Fjord Line, and the DFDS route between Göteborg/Kristiansand-Newcastle was closed on 1 November 2006. The acquired route was not profitable, however, and was closed in 2008.

In 2008, the passenger service between western Norway and Newcastle was closed due to lack of profitability.

In 2009, the ro-pax route between Lübeck and Riga was sold to Baltic ferry company Scandlines, and in 2010, after the takeover of Norfolkline, the route Zeebrügge-Rosyth (Scotland) was changed to a freight-only service.

Later, in 2010/2011, the unprofitable routes on the Irish Sea were sold to Sweden-based ferry company Stena (Belfast-UK) or closed (Dublin-UK).

A new concept, ro-pax vessels, was launched in 2002 on the Esbjerg-Harwich route when DANA GLORIA entered service on the route.

In June 2003 the second ro-pax vessel, DANA SIRENA, was deployed on the Esbjerg-Harwich route, and DANA GLORIA was acquired by the Lithuanian subsidiary, AB LISCO.

In November 2005 DFDS purchased the passenger vessel KING OF SCANDINAVIA, deployed on the Amsterdam-Newcastle route.

During the period 2001-2007 the Group sold 27 vessels, including five passenger vessels, as part of the fleet strategy set out in 2001 to reduce the average age of the fleet.

DFDS is still sailing on some of the same routes begun in the 1800s.

Development in DFDS in the period 1966-1999 has been more rapid in all areas than in the preceding 100 years. Technology has advanced with lightning speed, some activities have been discontinued, new ones have started and stopped, others further developed and strengthened.

The organization has undergone changes several times. It has merged with a number of companies, and in 1971 the company officially changed its name to DFDS A/S – The United Steamship Company A/S – as part of the growing internationalization.

Admin: The rest as they say is history!